An AR game to learn more about the impact of food

Food production and waste account for over 26% of all global emissions, causing biodiversity loss, freshwater withdrawals, and more. Amsterdam’s aim to become fully circular by 2050 demands a plan of action from the city as well as from its citizens. How can we educate people about the impact of food and facilitate debate around this topic?

In 2020, Amsterdam announced its goal to become fully circular by 2050 by adopting the Doughnut Economics - a circular economic model that aims to prevent the shortfall of life essentials and overshooting of the ecological boundaries. Within this model, food is a critical sector, as a significant part (11%) of the population is undernourished, but also causes the overshoot of the ecological ceiling on various levels, such as biodiversity loss and freshwater withdrawals. Since Amsterdam is implementing the Doughnut model, they set a plan of action, which applies, among other things, to the food system. While providing more sustainable dietary options, the choice is left to the citizens themselves. Due to this challenge, the brief and goal of our project was to create an interactive installation that communicates to Amsterdammers the environmental impact of food production and waste. 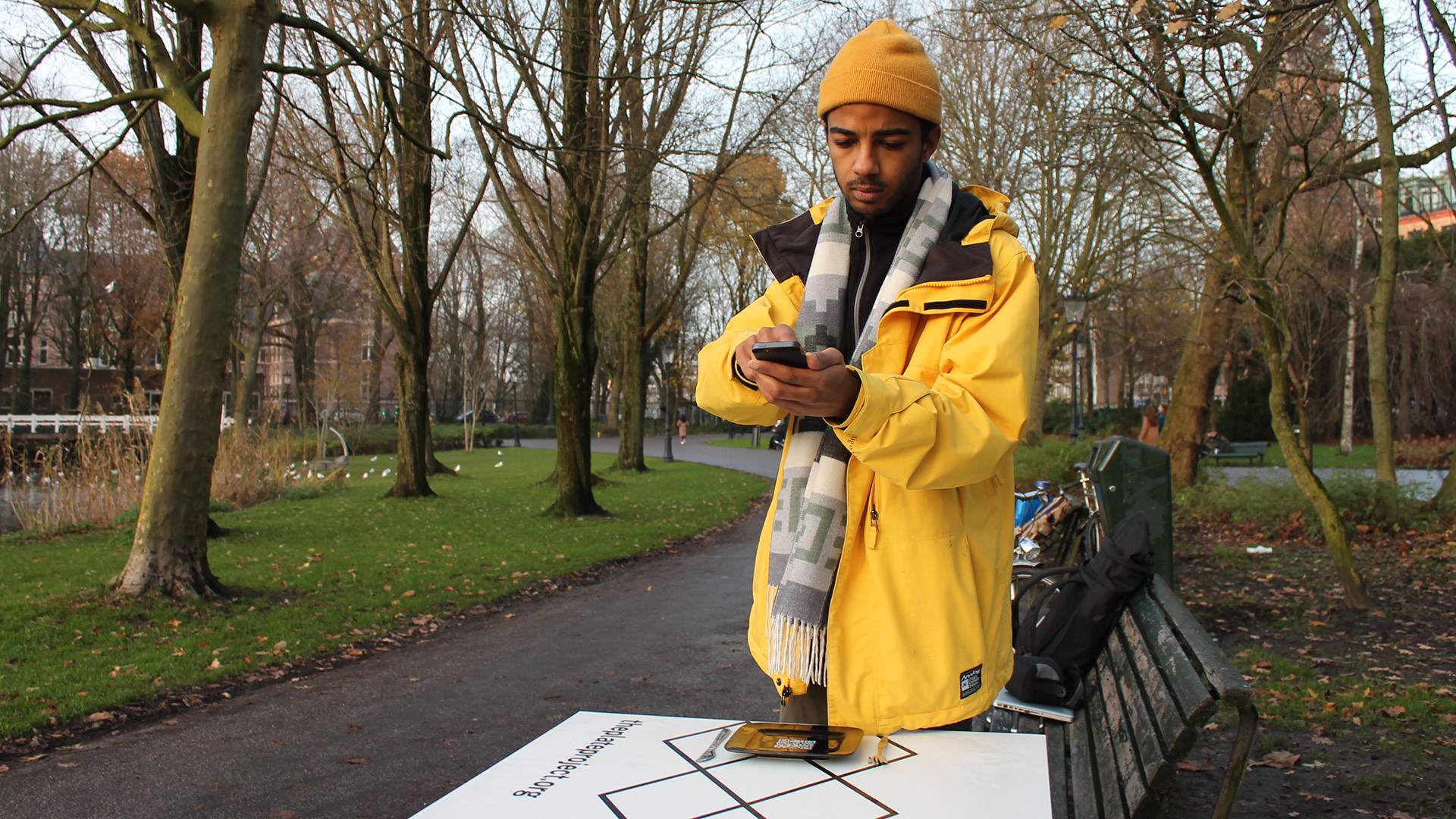 A Bit Less Food a Day Keeps the Waste Away

While educating ourselves about the topic, we identified two main aspects that have a major environmental impact. One of them is the amount of produced food that is not consumed. In 2019, every person in The Netherlands wasted an average of 41 kg of food. Globally, food waste is responsible for 6% of greenhouse emissions.

The second factor regards meat production and beef in particular. Just like eating vegetarian or vegan, choosing other types of meat, such as chicken or pork, can reduce the personal footprint significantly. To make people aware of these differences, we decided to go for a tangible comparison of different dishes, combined with advice on how to prevent food waste. The comparison makes it possible for the users to recognize the difference and draw a conclusion themselves. 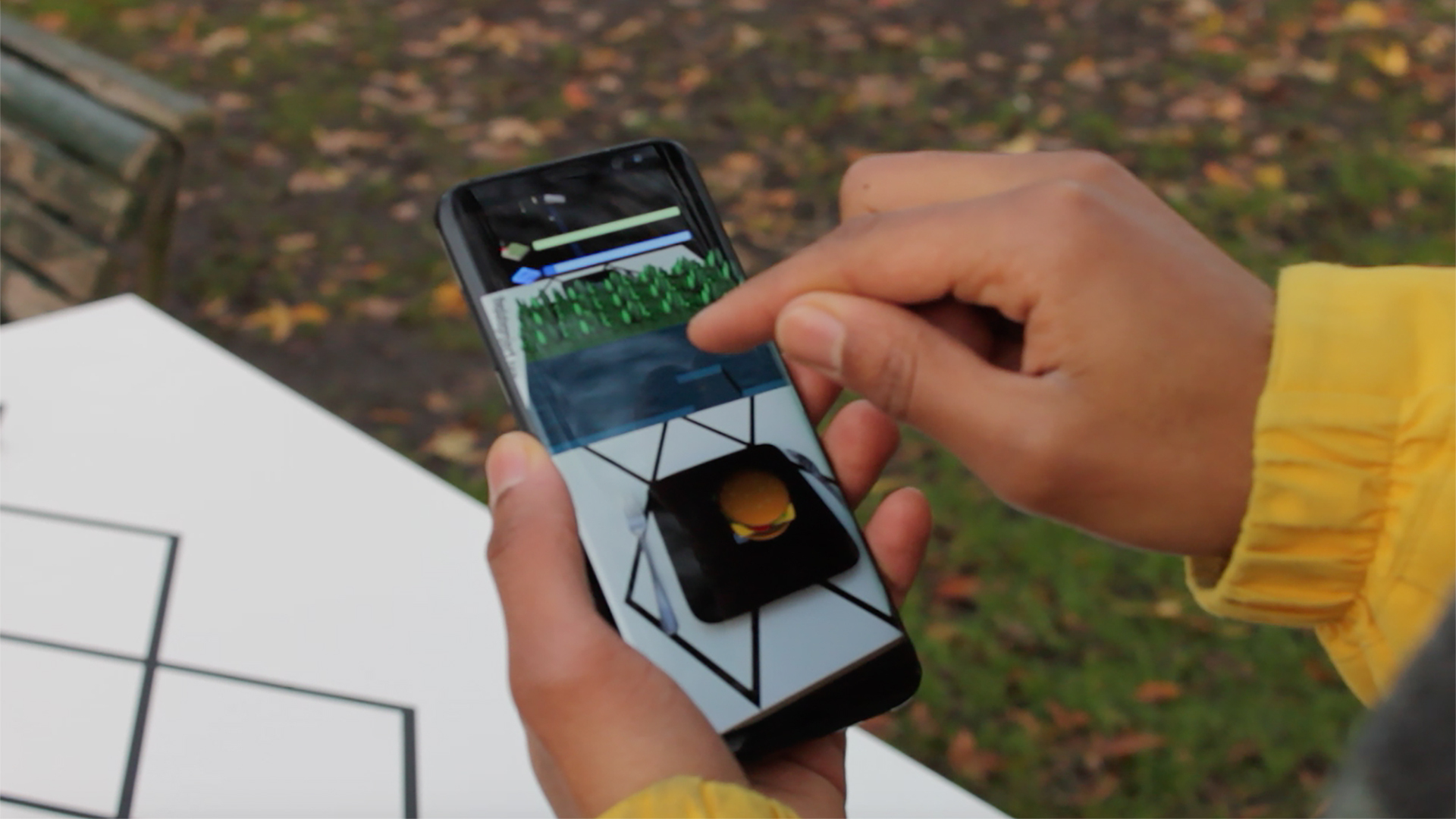 A Plate in the Park

Designing an installation for a vibrant city like Amsterdam is certainly not an easy task. People get overwhelmed with impressions through the plethora of stimuli and tend to pay attention to very few of them. In our tests, we hung posters that got completely ignored, so we needed something exceptional to grab people’s attention. After doing further research and conducting some more tests, we developed a concept around a table with two plates and cutlery, which were defamiliarized by being placed on a sidewalk. 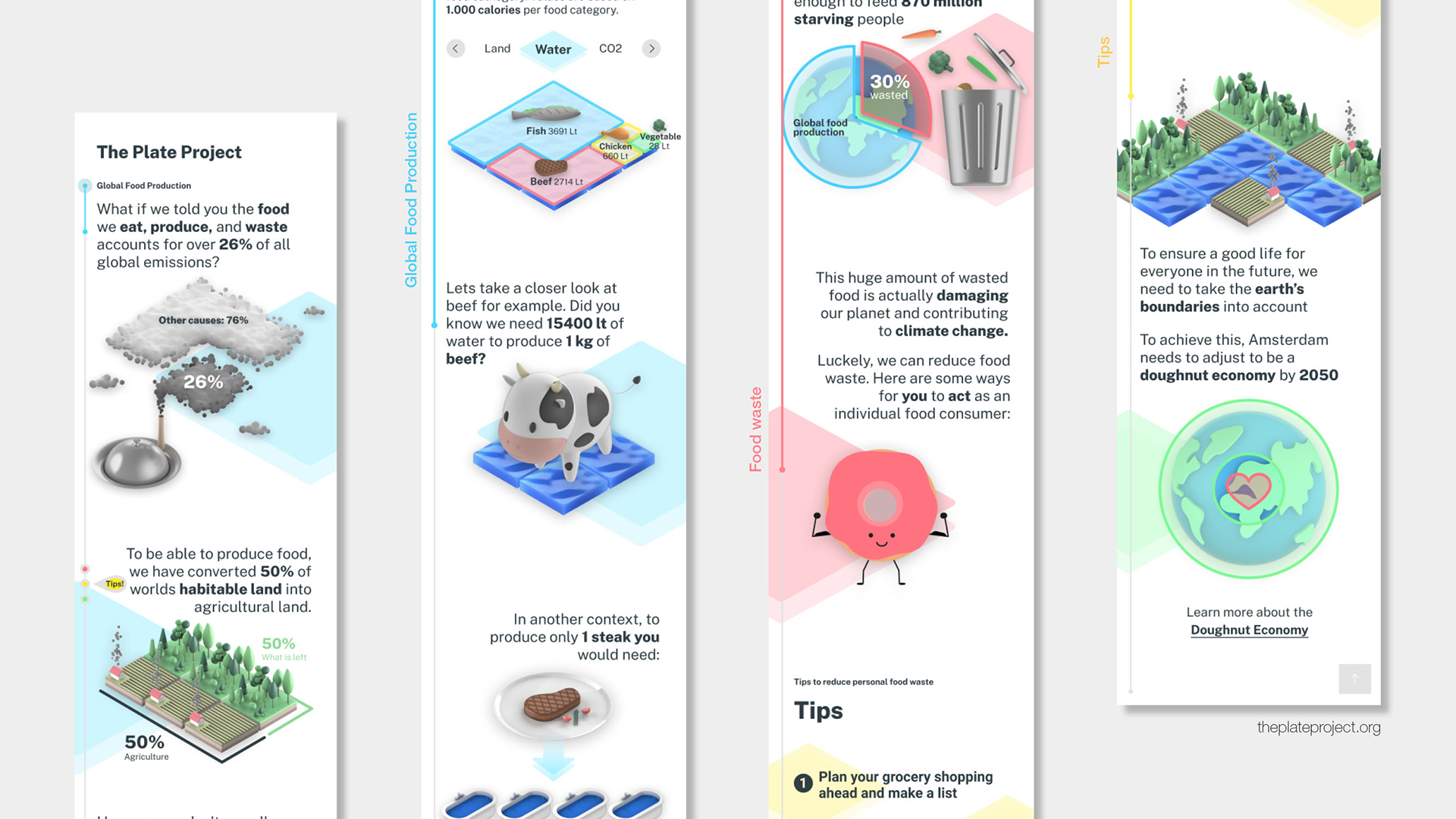 To further engage the urbanites in the installation, we combined the alienated table with a relatively new technology that they didn’t experience in abundance yet and thus are rather curious: Augmented Reality. In this way, people could interact with their mobile device in a public space, which brought about many advantages. It not only provides personal safe space in the public context but also makes the installation safe to approach during a pandemic. 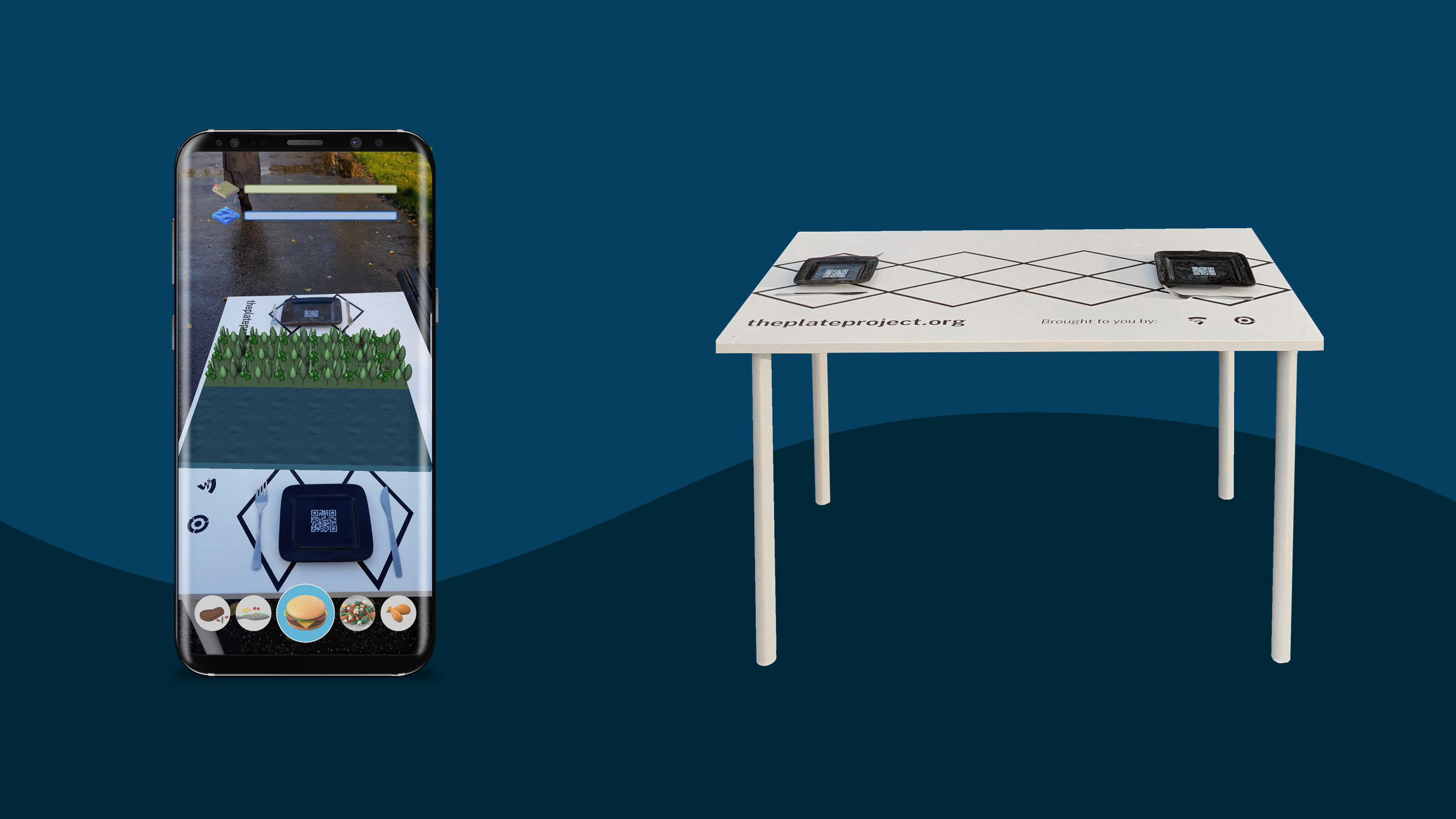 The Plate Project is an AR game, consisting out of a table with two plates that have a QR code on them and nothing else. When passers-by scan the QR code, they get directed to theplateproject.org where they can enter the AR game. Once the game starts, the user is asked to choose a dish: beef, chicken, fish, or vegetarian. But that is not enough to get the dish served at the table. First, they must convert forest into agricultural land and take water from the freshwater reserves, by clicking on the forest- and water tiles that appear on the middle of the table. After having collected all the land and water needed to produce their food, they can see their chosen dish on the plate. To learn about the other dishes, they can compare them afterwards. The difference is significant: while the vegetarian dish only needs one tile each, the beef takes most of the tiles available. By presenting two plates, we hope to engage two people at the same time and that they can initiate a debate between them. 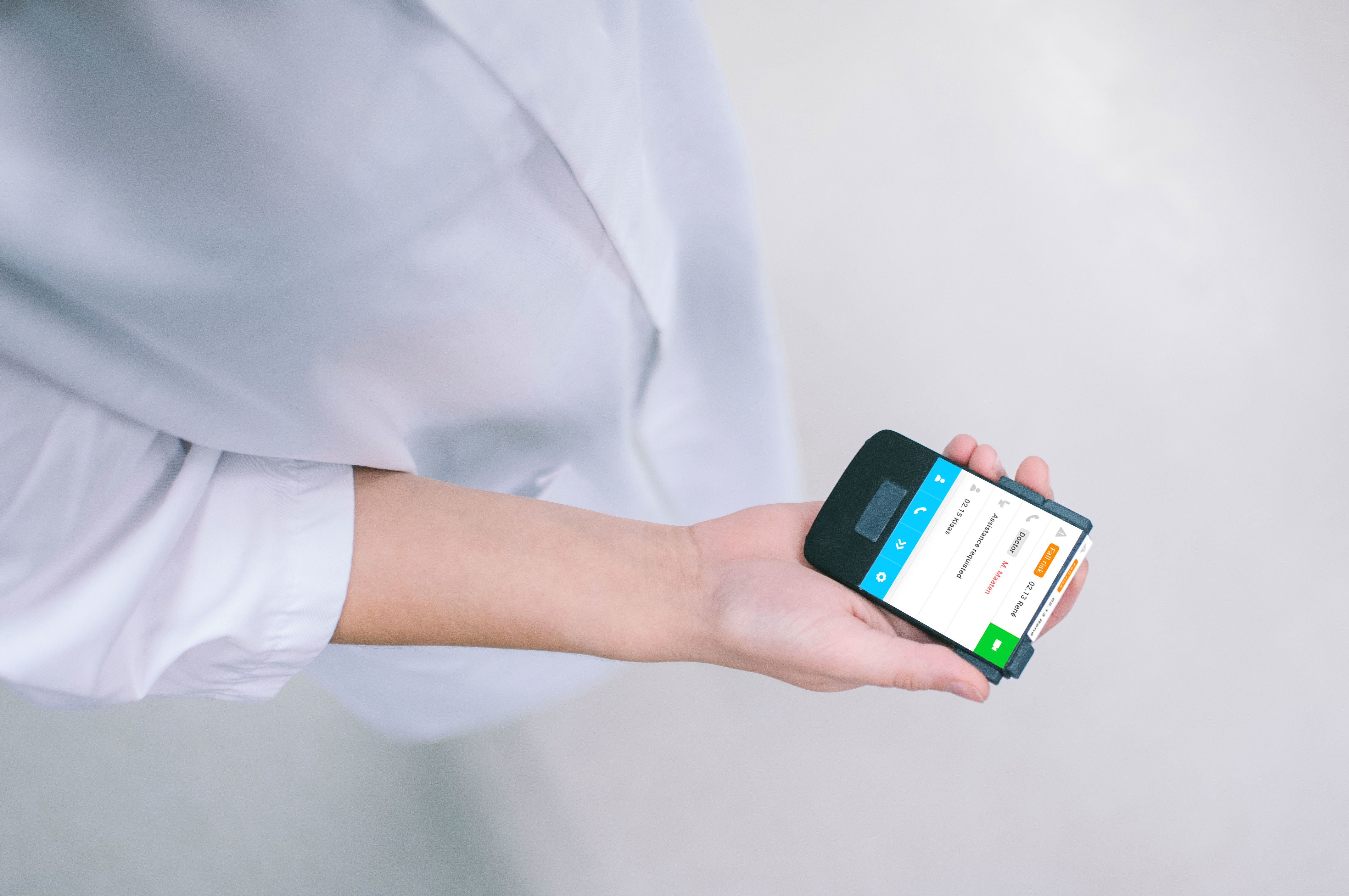 The Invisible Cages
A hybrid experience to start conversations around racism