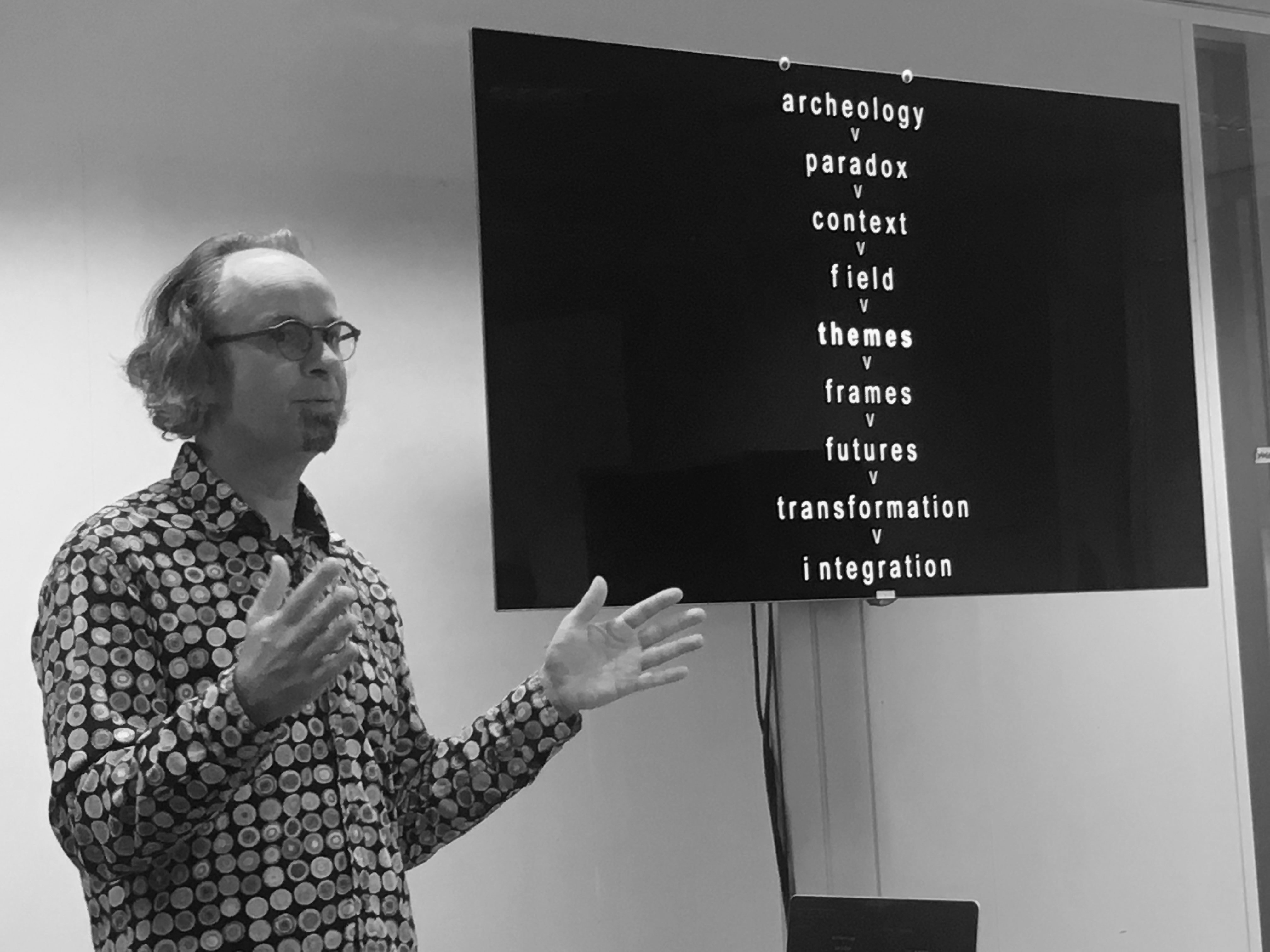 Designer Kees Dorst challenges the role designers play in today’s open, dynamic, complex, and networked world. And he shared his thoughts with the Master’s programme in Digital Design.

It’s no news that the world is changing and it is changing fast. And change demands what designer Kees Dorst says to be a need to step back from old values so that we can create a new order. And it’s in this process that designers have a key role to play.

At our Master’s programme's headquarters, Dorst explained his theory in design framing and new thinking to an audience of students, professionals, and lecturers.

After the event, Ben Schouten, scientific director of the Master’s programme in Digital Design, sat down with Kees Dorst to hear more about his thoughts on the designer of the future.

1. It’s interesting to hear you talk. I was trying to understand what the profile of the new designer is. What do you think about it?

For me is much more about bringing together knowledge from experts from different fields and integrating that into a solution. There’s a lot of knowledge out there which is all, basically, gathered analytically, but there’s never been a design-step after that gathering.

When I started my research centre, I thought that I needed to do a lot of research. It turns out the research is there but nobody has ever acted on it. But designers aren’t really the best people to do this. Because to do this well, you need a lot of knowledge from the field itself.

I did a project on anti-radicalisation through which I met a terrific youth worker. In interacting with him, you start to see what he does and then maybe there are some elements in what he does that can be given a shape so that other people can do that too. For me that is the design-approach to this kind of case. But it just breaks my heart to see the designers involved in the project, who don’t know anything about this kind of stuff, think that they would be able to come up with a novel and relevant solution in such a complex area after just a brief interview.

2. So how can we make it work and ensure we have both the experts and the designers onboard?

All these design processes are moulded as stand-alone processes. But it’s not true. And you train students as if they have to do everything. They become very bad team-players if you do it that way. So being sensitive to knowledge in other fields, being able to use that creatively, connect that creatively so that it leads to a solution is much more of a design game now than it used to. Especially if you do self-initiated design or social design because we don’t have the clients to keep you on track. People just go off-track and they don’t even realise it. 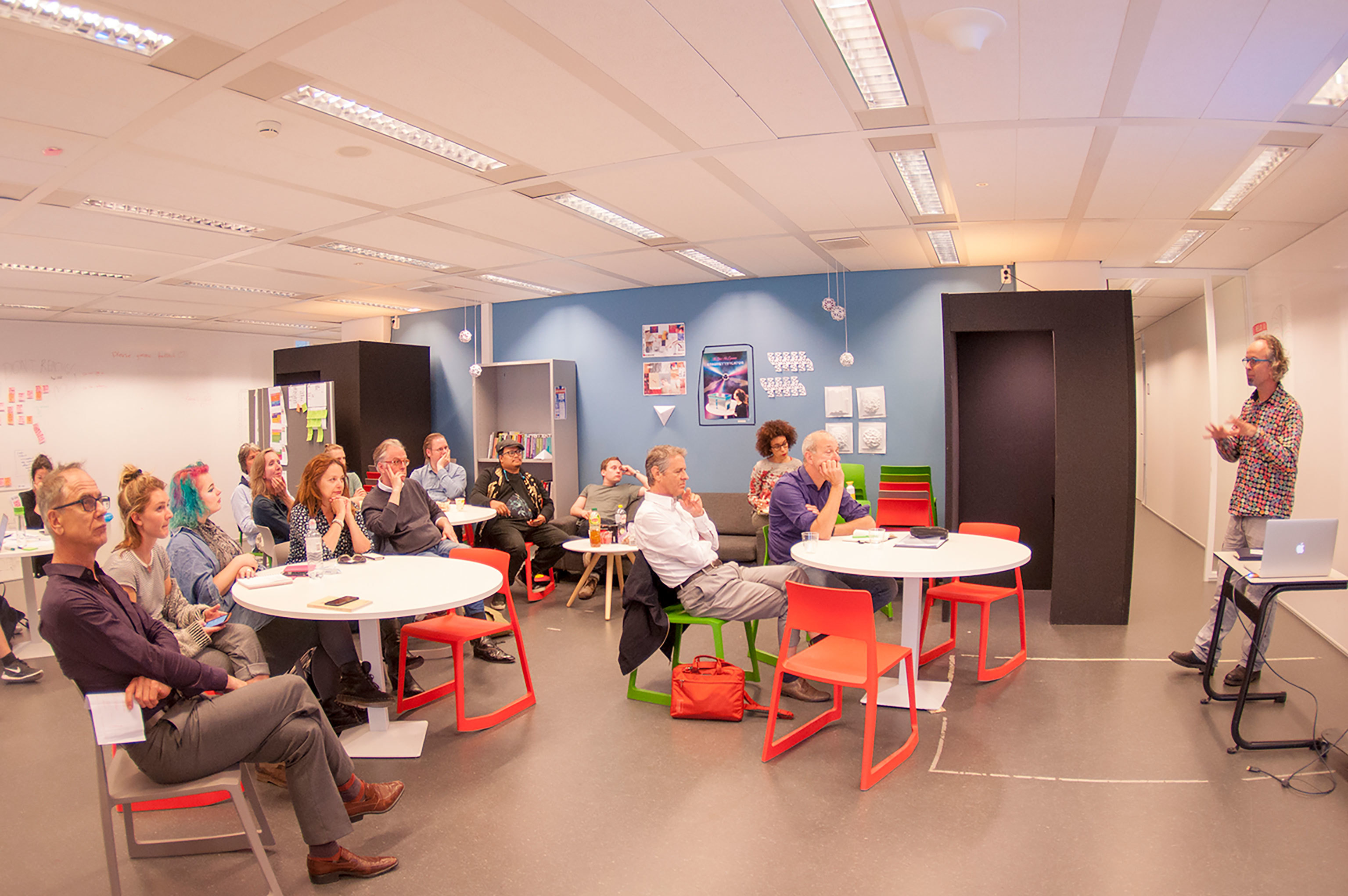 3. So what should we train them for?

I find a lot of the design people who try to answer that question quite nostalgic. They’re trying to save design. Well, design is not an end in itself. So I’m not interested in saving design. I think there’s a lot of value in design. What I’m interested in is design as a way of thinking. I see the potential, I try to lead the troops in that direction, but there are no troops. Because the people in other fields pick it up quite easily and feel empowered by these design things; but the designers themselves, they’ve got so much trouble interacting with this.

It’s just where the field of design comes from basically. For instance, there’s a lot of social design happening, which is good because people want to do good for society and use their skills for society, which is all great. But in normal product design we work with a client. What that client does - I mean they’re a pain in the ass as you know - but they question your assumptions and they represent a lot of knowledge of the field. In social design, there is often no client because you’re working for society, which means your assumptions go unchecked. And that means a lot of social design projects end up with completely ludicrous, harmful, stupid, naive solutions because they have never been checked. So design as a field has come about in interaction with the outside world in a certain way, but when you break that interaction design has to be clever enough to adjust.

It can be a little bit arrogant and annoying in wanting to be the one who comes up with a solution.

5. So you should always have reality cases in a master’s education?

Yeah. Because design has lots of good stuff and it’s got big holes and it’s being pulled out of its normal environment into a different environment and it seems to be very slow in understanding that environment. And it can be a little bit arrogant and annoying in wanting to be the one who comes up with a solution in an environment where it’s a)  impossible and b) nobody wants that from you.  Still you feel that you need to because you’re the designer. So design comes with baggage and at the moment that’s really holding it back.

6. But has the designer become a mere facilitator?

No, I’m not in favour of that pure notion of facilitation or that the designer is just a project leader in a different way. All kinds of methods, techniques, and stuff in design have been made more explicit because it helps people put focus on innovation but you also have to shape that innovation. And you know things about coherence, you know things about reaching integration; there’s this need to surprise; you also know about the need to keep people’s attention if you have a service economy with lots of stuff that have multiple steps… Those are all design questions. Those are not the kind of things that those other people are going to actually bring to the table. But you want and need their expertise and you must listen to it, see whether it can be used directly or if it needs to be augmented and changed.

Another reason why I work with very few designers in some of these projects is because design is defined by the nature of its outcome: product design, graphic design. You know what they’re going to come up with and you know they’re going to be quite trigger-happy because they want to get there. So I work with artists quite a bit because they’re much more fluent in not knowing or being in that in-between space of ‘whatever-as-long-as-it’s-interesting-I’m-happy’ instead of wanting to get to a solution.

You can’t just blame designers for it. It’s what the world does to design too. Years ago, a social designer told me: “When I say I’m a designer, people want me to solve something and that’s pre-packaged. And I need the freedom of also calling myself an artist and then I do something that is very unusual and people are very happy.” So, it is also how the world projects design. And it’s very hard to get around that.

7. What do you think the intervention of a designer should actually be?

We’ve always  taught design as if design is going from problem to solution and that it is one project. But it’s actually what happens across projects. I’m doing a project with the airforce now and there’s 100 design projects in there because we’re trying to get some deeper insights. It requires you to define differently what you think it’s the impact of design. Because it’s not about solving a problem, it’s actually about changing the thinking in the sector or how a sector innovates.

Design is a way of thinking about the world from this inside perspective and reconstruct it.

I’m not saying the other design isn’t needed because we need stuff. But the design that has this intellectual curiosity to it and is driven by that curiosity, I think it’s really important. I mean, one of the reasons I started studying design was that it helped me understand the world a bit better. You see things around and you wonder about things. And design is a way of thinking about the world from this inside perspective and reconstruct it: ‘ok they’re doing that because of this and this and this’ and that’s a coherence. So design is also analytical in that sense.

8. So with whom should designers hang out, especially our students?

The edge-dwellers of a field. The people who are picking up something new. Those who are still doing it very much from their perspective but what they’re doing conceptually is very interesting and could be a game-changer. So you have to find edge-dwellers in these different fields. Design should become very good at picking that up, and thinking about it, and extending it.

9. It sounds as though a good designer needs to be a networker?

A good designer has to be a very good listener and a very respectful listener, and still not take everything on face value because the knowledge of those other fields also comes from a framing which might be very limiting. So you need to understand it and be able to reshape it in a way that makes much more sense. But then that’s the creative act that’s in that kind of process.

10. So design-thinking should be fluid all the time?

No. You only need framing when you’re really stuck. If your normal way of working doesn’t work anymore you need to think it differently. I mean it’s not rocket science, it’s not even philosophy, it’s common sense. So that’s when you need framing. But what you need in organisations and sectors is the ability to do that: to raise the flag and say there is something going on here we don’t understand; or there’s something going on because we’re not as effective as we should be. And I think that’s the space where you would also want to see designers. 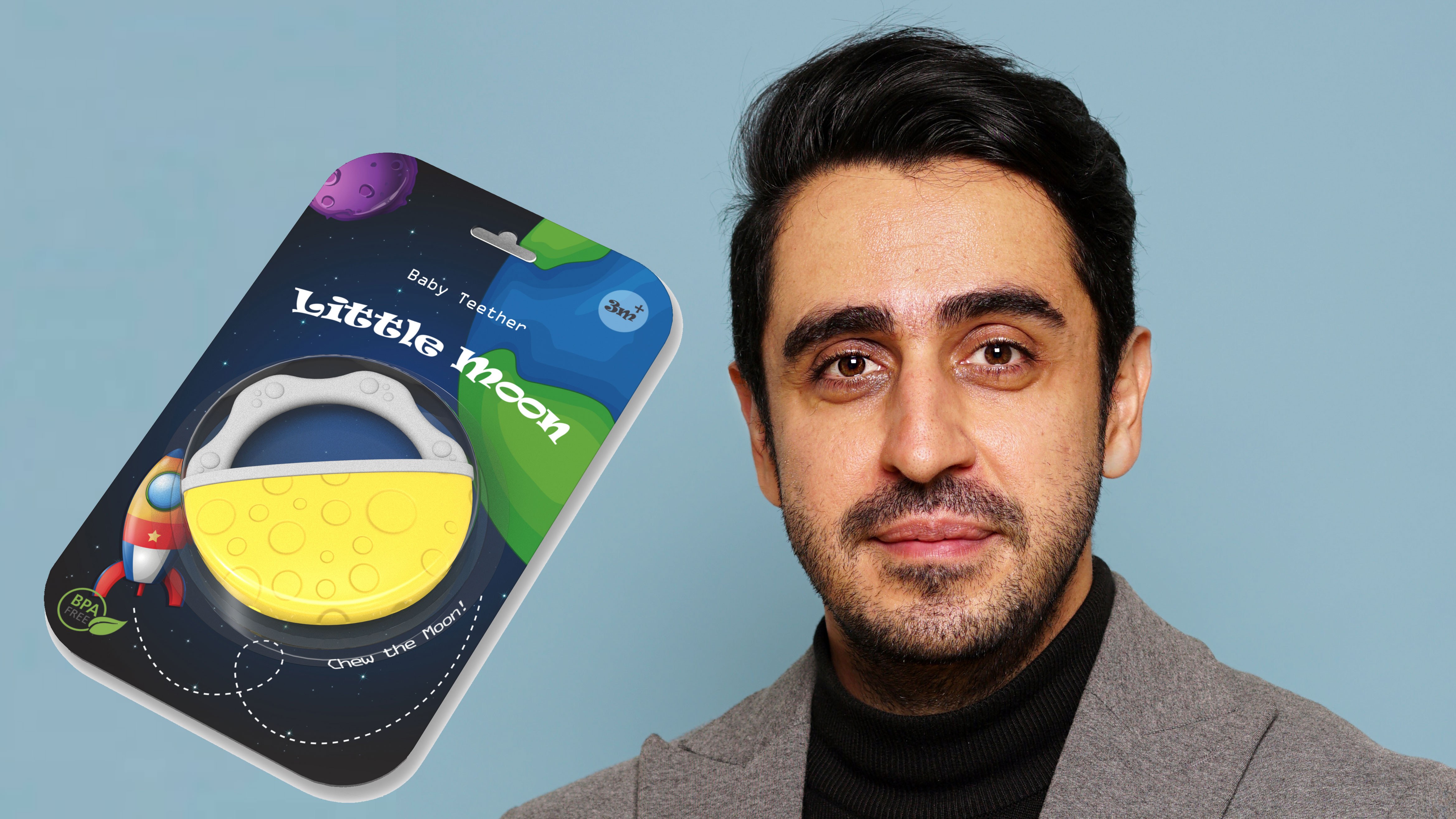 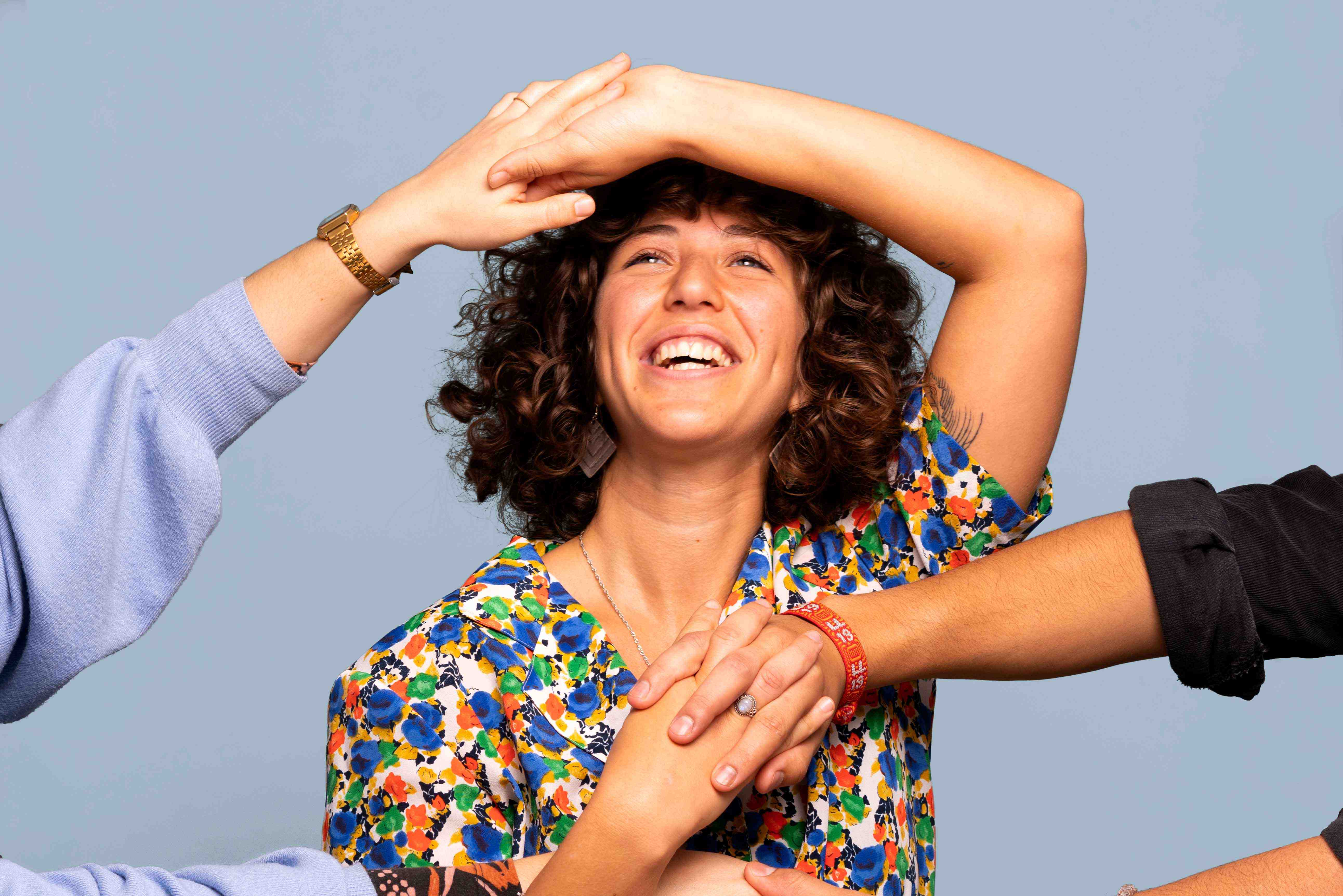