Exploring the future of newspaper advertising 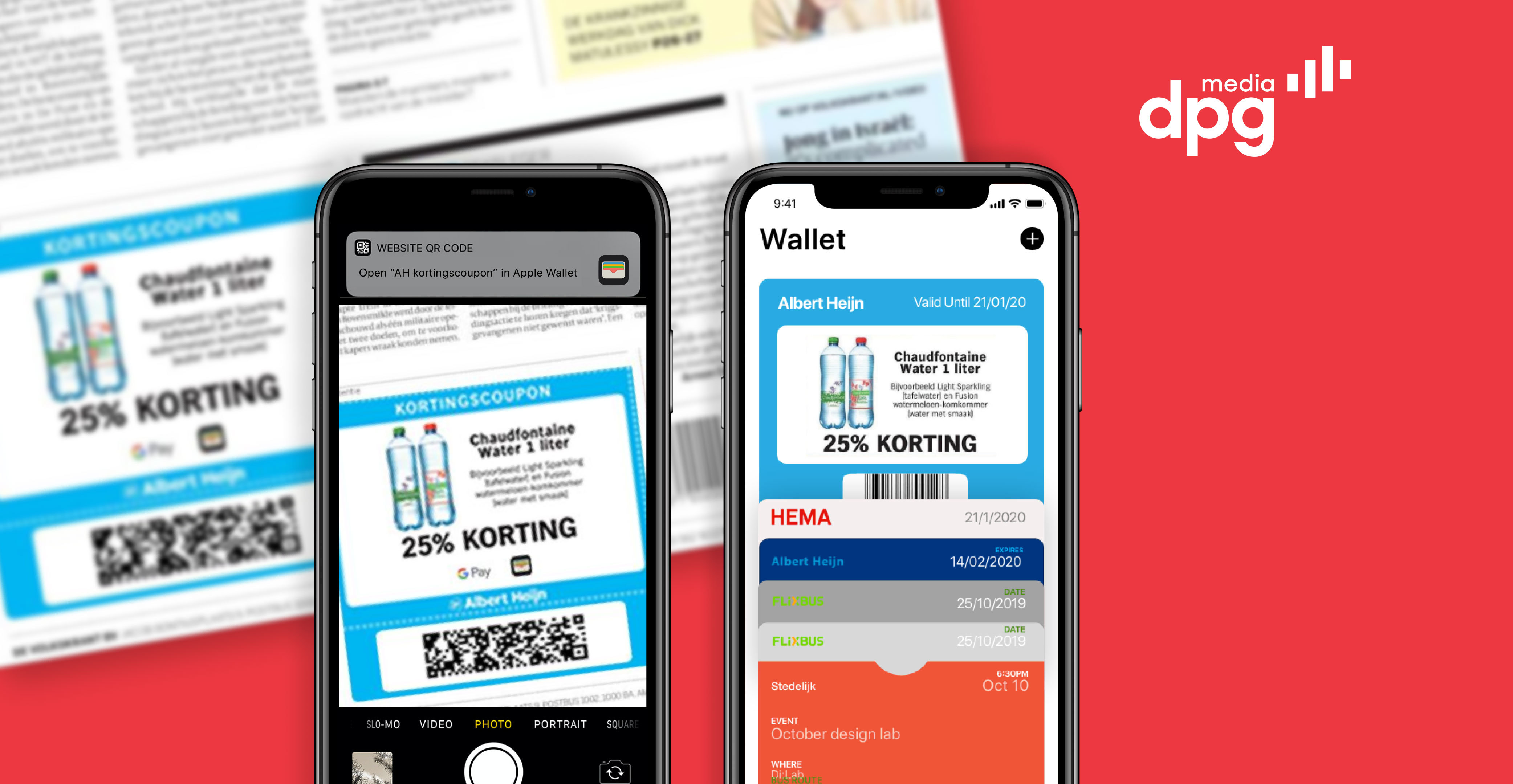 Media outlets rely on subscriptions and advertising to operate. But advertising in traditional media, such as newspapers, has greatly decreased in the last 10 years (McCann advertising, 2019). Advertisers have been shifting their budgets to Google and Facebook as they offer more effective ways to target the right audience. 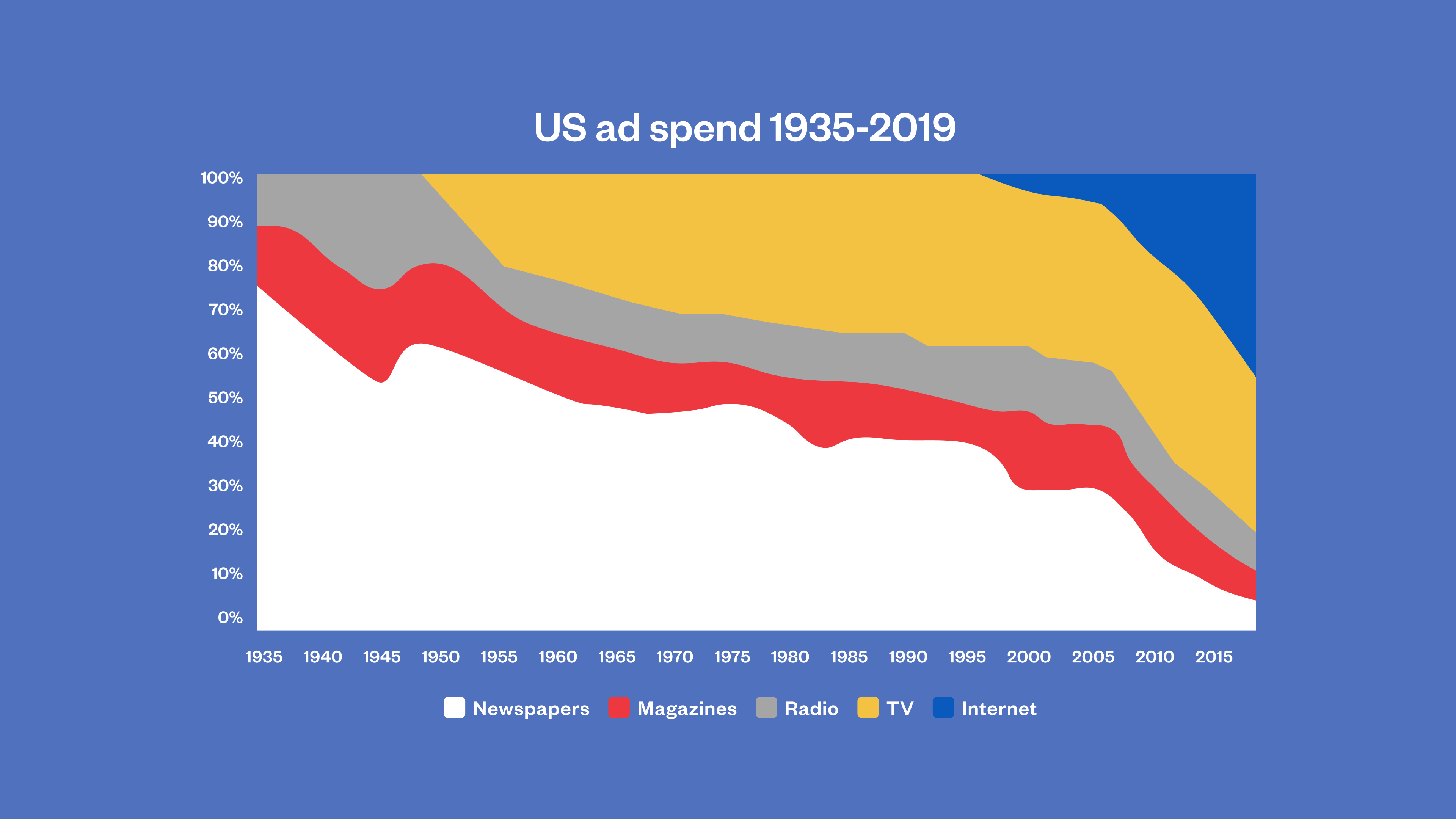 This makes advertising in a traditional newspaper not as attractive as it used to. From every dollar that is spent on digital advertising, $0.50 goes to Google, $0,25 goes to Facebook and the remainder is divided between the various other platforms and outlets. Publishers worldwide need, besides subscriptions, to build on new advertising business models to stay competitive. 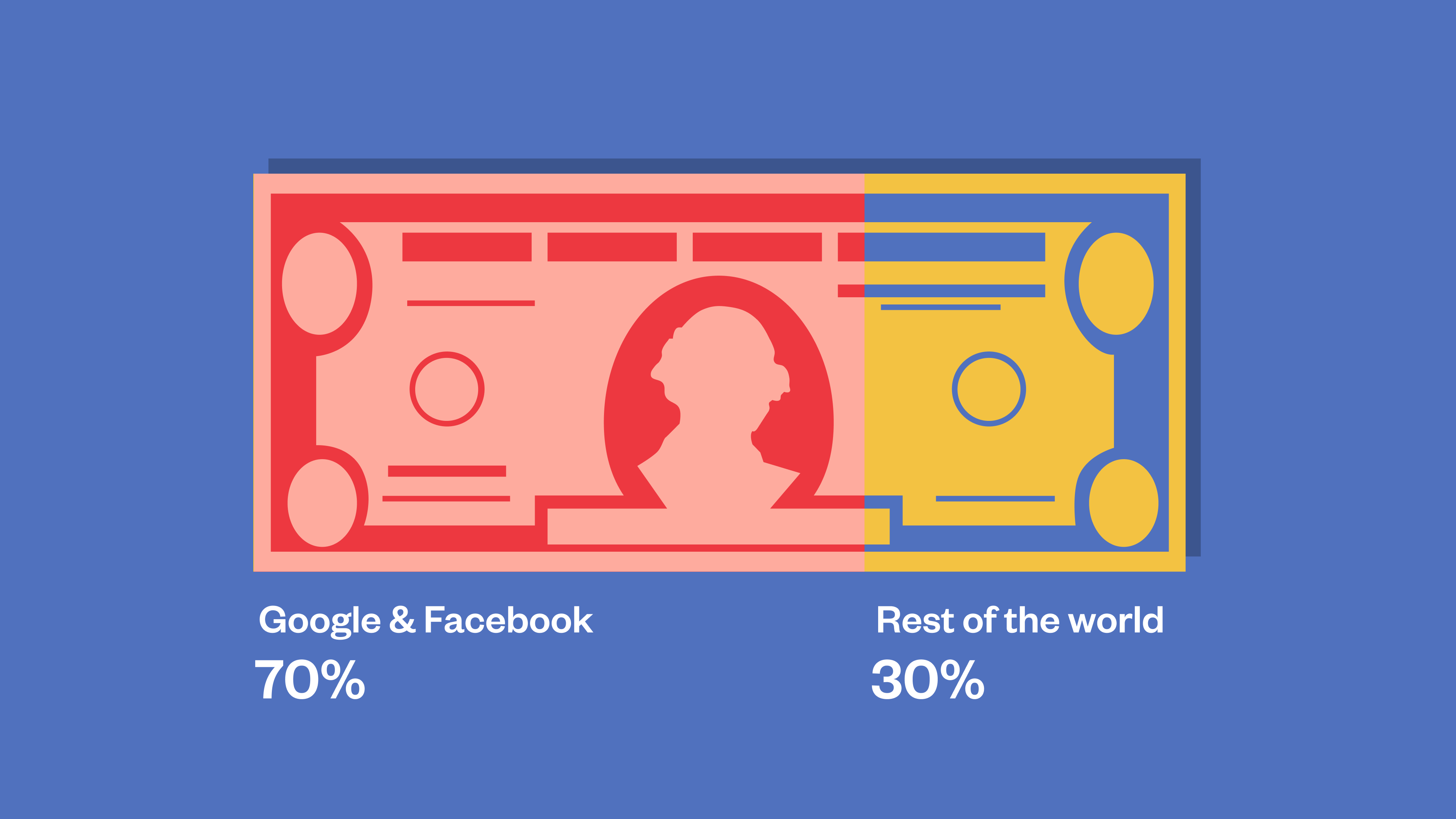 DPG is the largest media group in The Netherlands and Belgium. Every day more than 1200 journalists work on qualitative news for major newspapers including de Volkskrant and AD.

The company needs new ways to compete with the big aggregators. They asked us as a design team to explore the future of newspaper advertising. Design process.

We started by looking at media consumption. The aim was to discover how, where, and why the modern consumer engages with journalism. We asked people to note down their media consumption behaviour. We mapped these in a timeline and found out that, throughout the day, behaviour, context, and medium constantly switch. 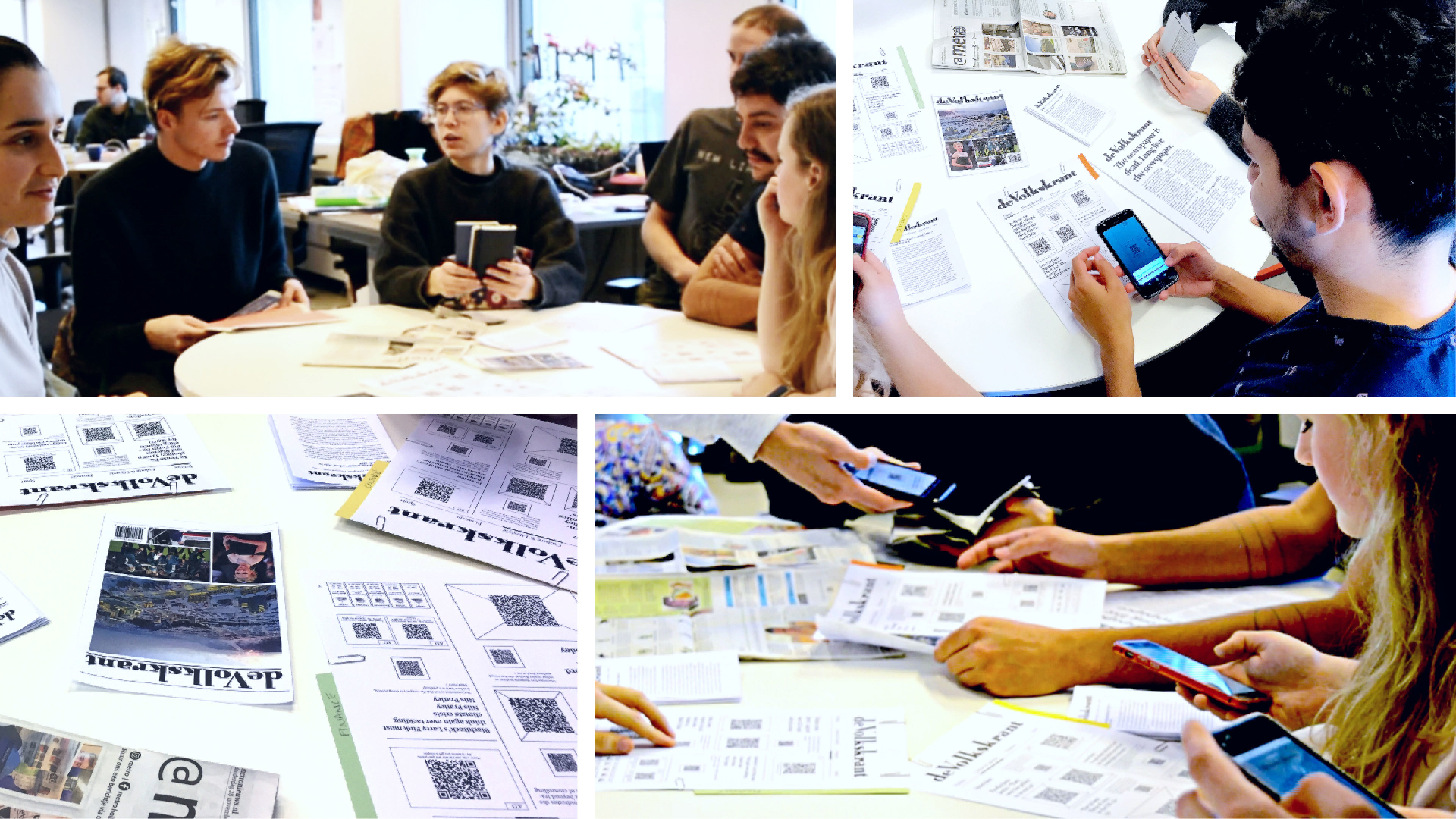 Based on these insights we set a design direction to ideate on. We wanted to:

The future of newspapers

To get a better understanding of the future of the newspaper, we made prototypes questioning the size and format. We explored those through a focus group, who were given design prompts in the form of the prototypes.

During the focus group, we started by looking at the characteristics of a printed newspaper. We found that some things are very hard to mimic digitally. There is something to paper: the feel, the touch, the smell. A printed newspaper feels curated by folks that you trust. Also, scanning headlines is easy and you can actually finish the news, there is an end to it as you leaf through the last page of the paper. On the web, it’s just boundless space. There are no borders; you can read anything (which is both a blessing and a curse). But, unlike physical newspapers, online content is interactive and can be better targeted based on your interests. 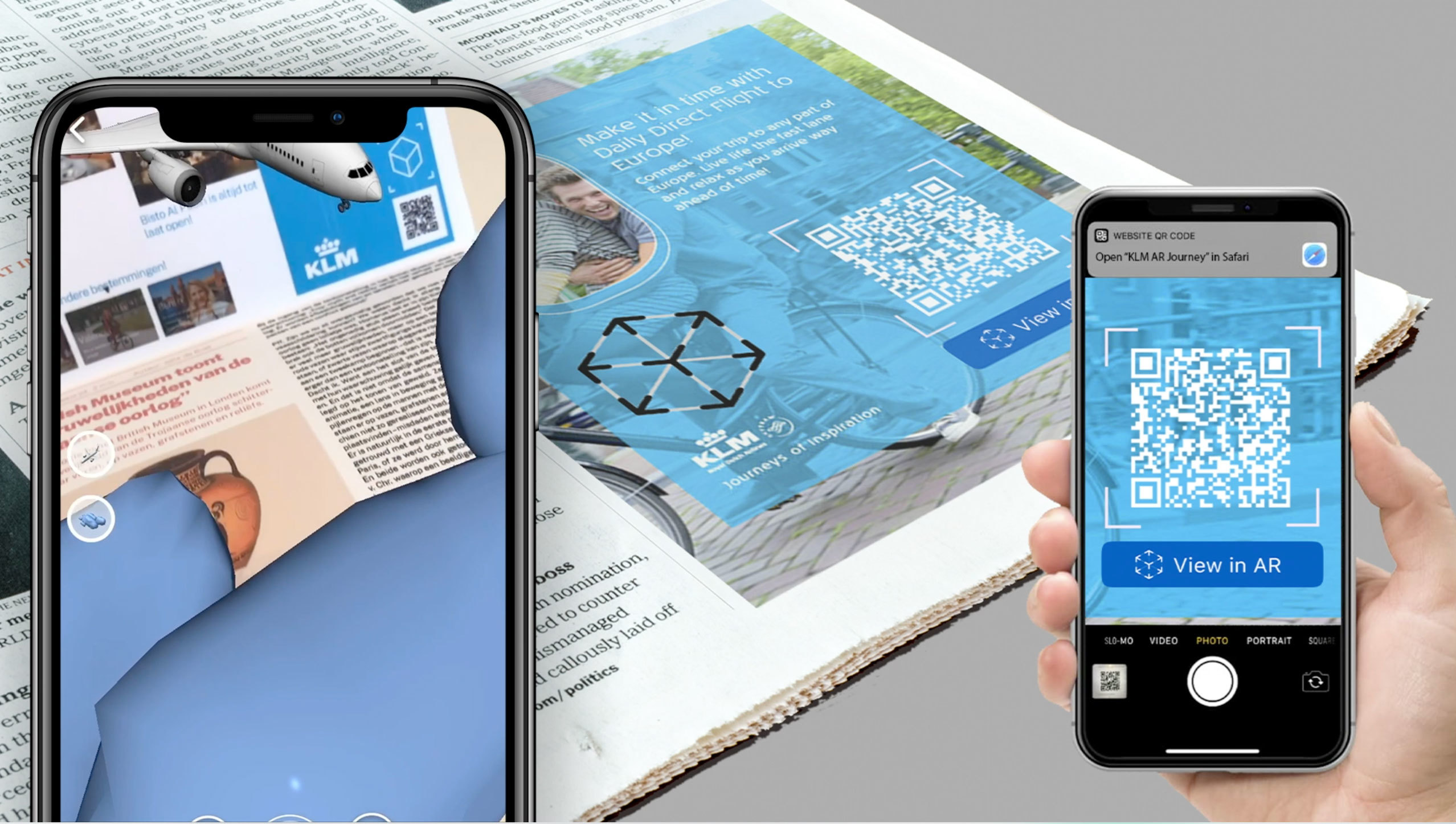 The insights from the focus group and desk research fueled our ideation for more speculative AR solutions. With the help of QR codes and AR technology, we explored a hybrid of paper and interactive technology. This enables us to let ads come 'alive' on paper. The AR ads are recognizable by their AR logo and corresponding QR code.

Brands can use this in all sorts of ways. Using the Dutch airline KLM as an example, you can scan the QR code to start an interactive ad. You can see yourself in a travel destination or fly around with a small augmented plane. The content is shareable and you can book the trip directly on your phone. 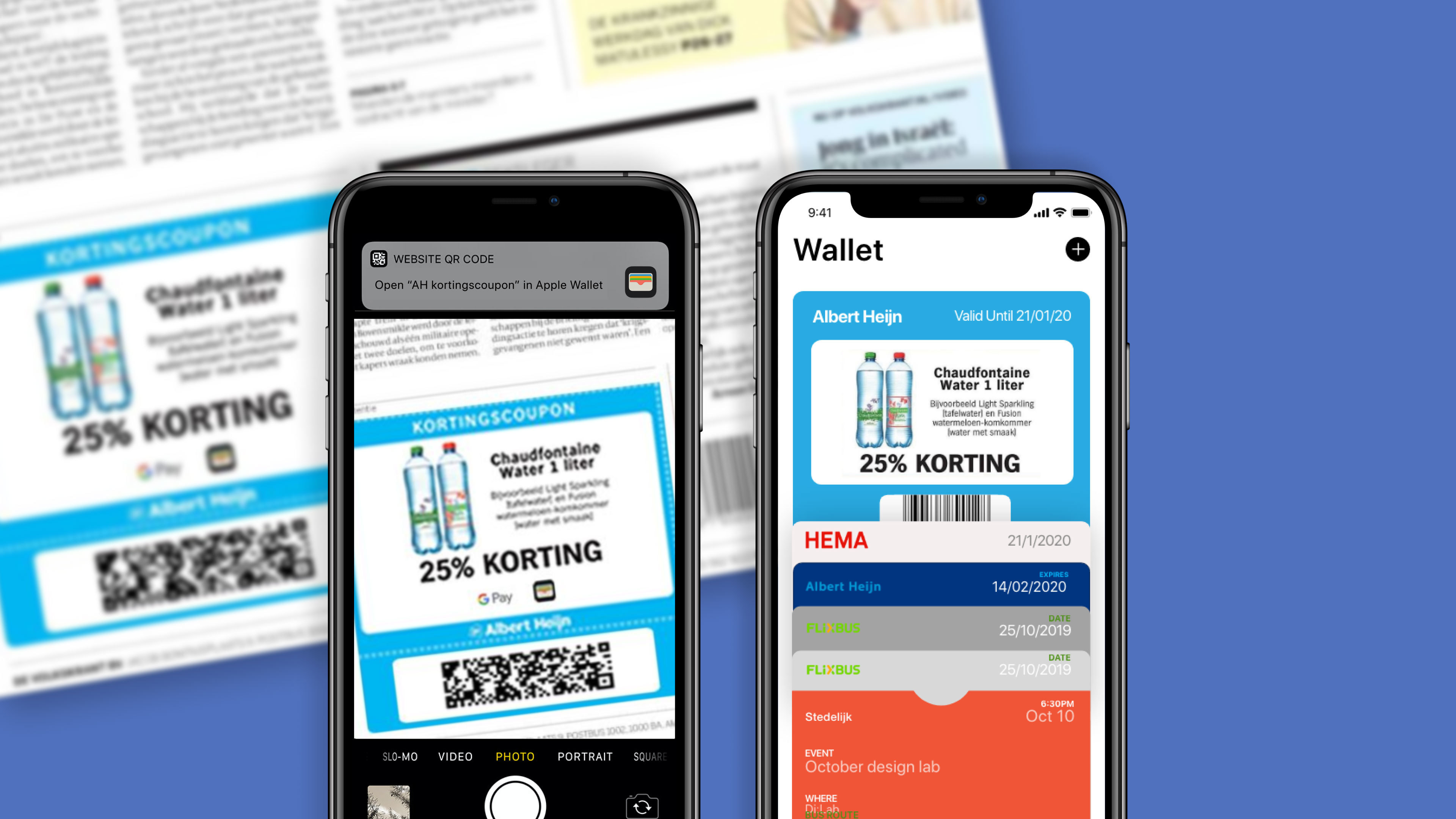 We also thought about alternative ideas to combine offline and online media. We found that ‘21% of readers still subscribe to local newspapers solely to collect coupons.’ (Observer American Consumer Survey.)

Ads can simply use 'ad to Apple wallet' logo. This can be used in stories, display ads, and even offline with the help of QR codes. Display ads can use skeuomorphic design details such as the scissor cut to mimic the physical affordances and recognizability of a coupon. 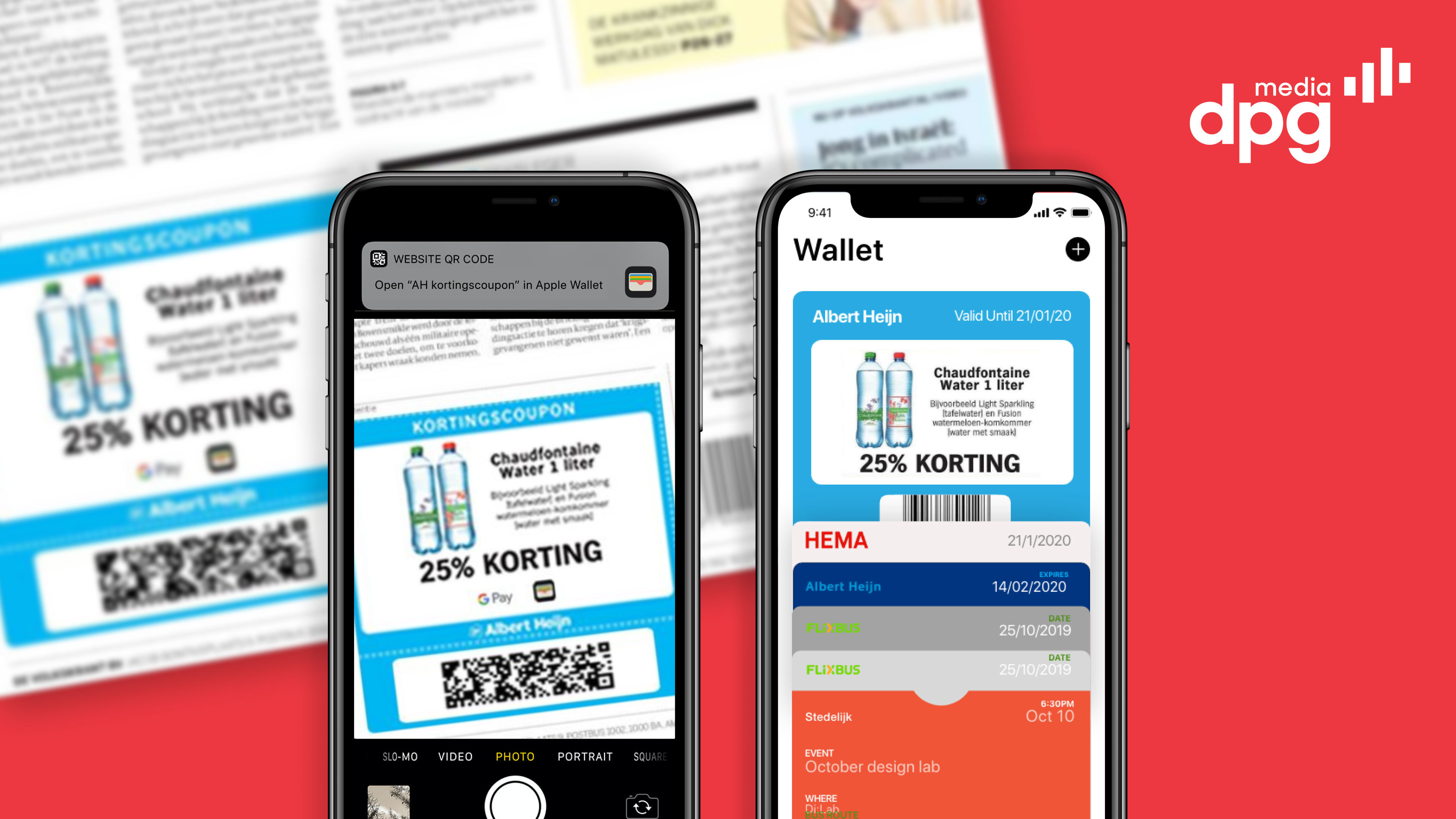 The digital Ad-to-Wallet concept lets advertisers display ads in both print and digital which leads customers directly to the native wallets. No app download or registration is required which dramatically increases conversion rates. People love to share coupons with their friends, so brands can increase their reach easily. The coupons can also increase in-store sales, as it encourages footfall to physical stores. 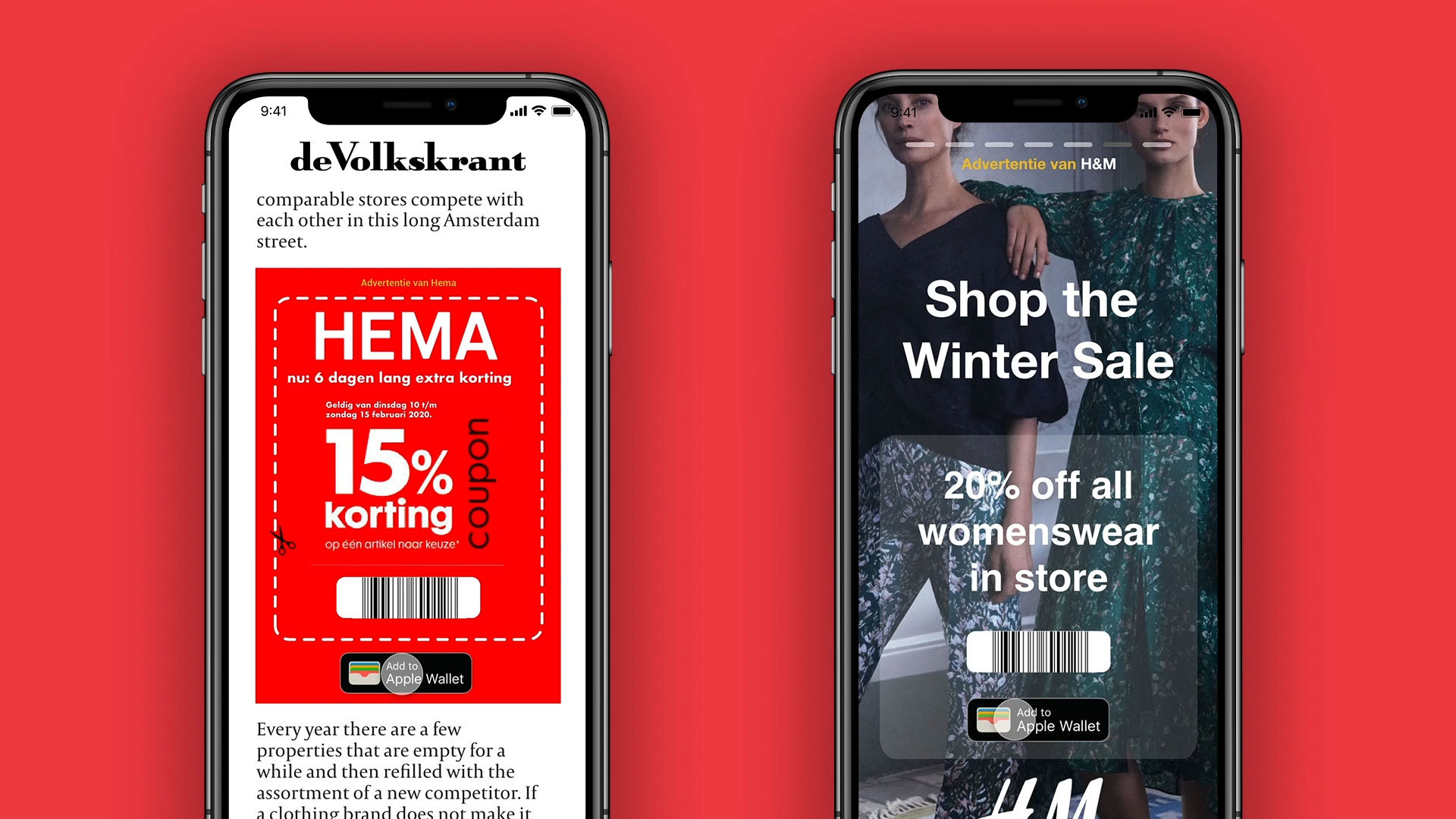 As designers, it felt contrary to work on advertising. User-centric design often conflicts with working for an advertising department. Most people simply don't like ads— they are annoying, in your face, or not relevant. From the beginning, we thus set the goal to make ads a little less intrusive. Through our research, we found out that people do not necessarily dislike ads. They just dislike ads that are not relevant.

Our final results included a couple of advertising concepts that focus on altering people's negative perceptions of advertising. We found innovative ways to combine physical and digital media that focus directly on conversion. 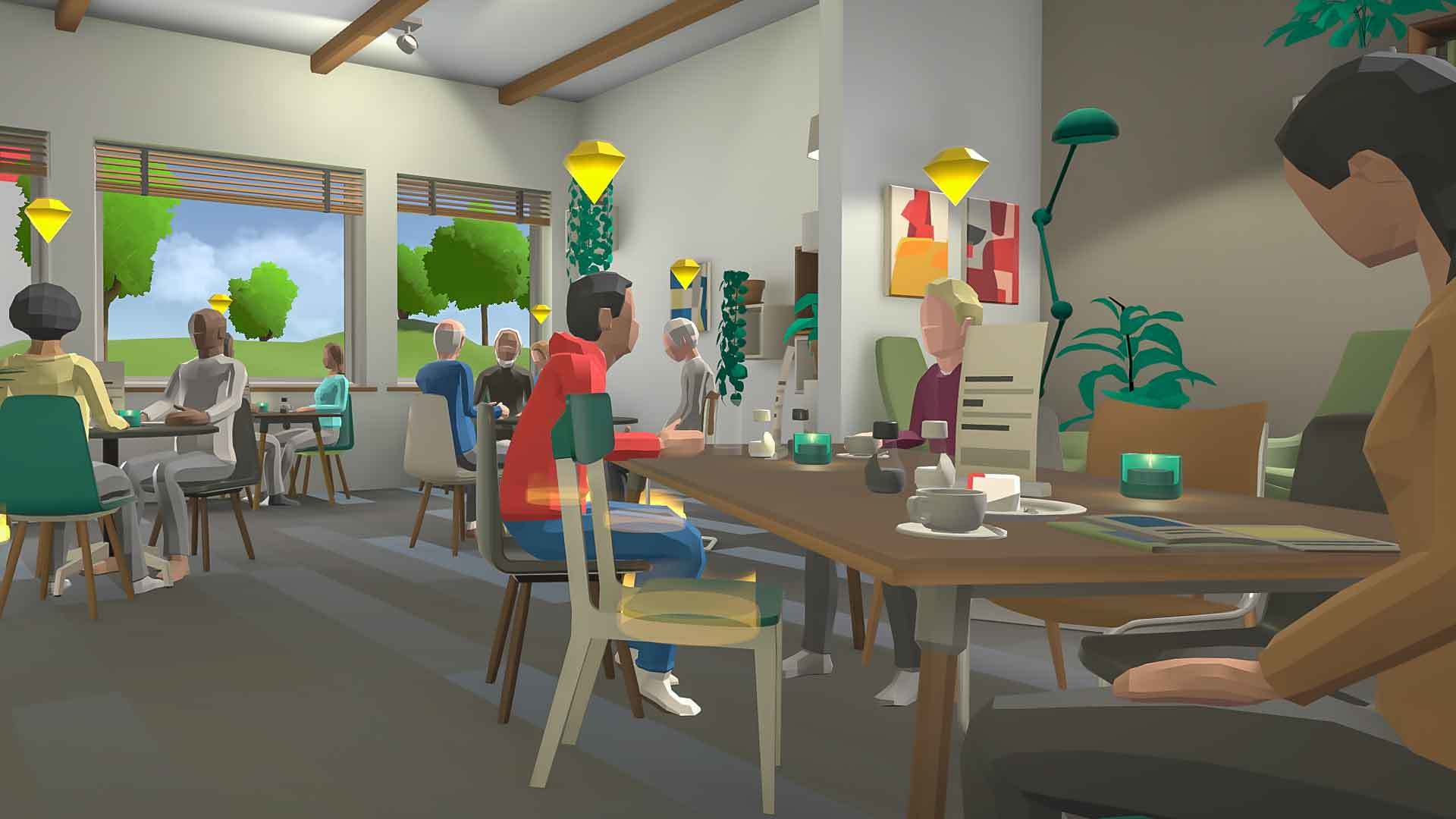 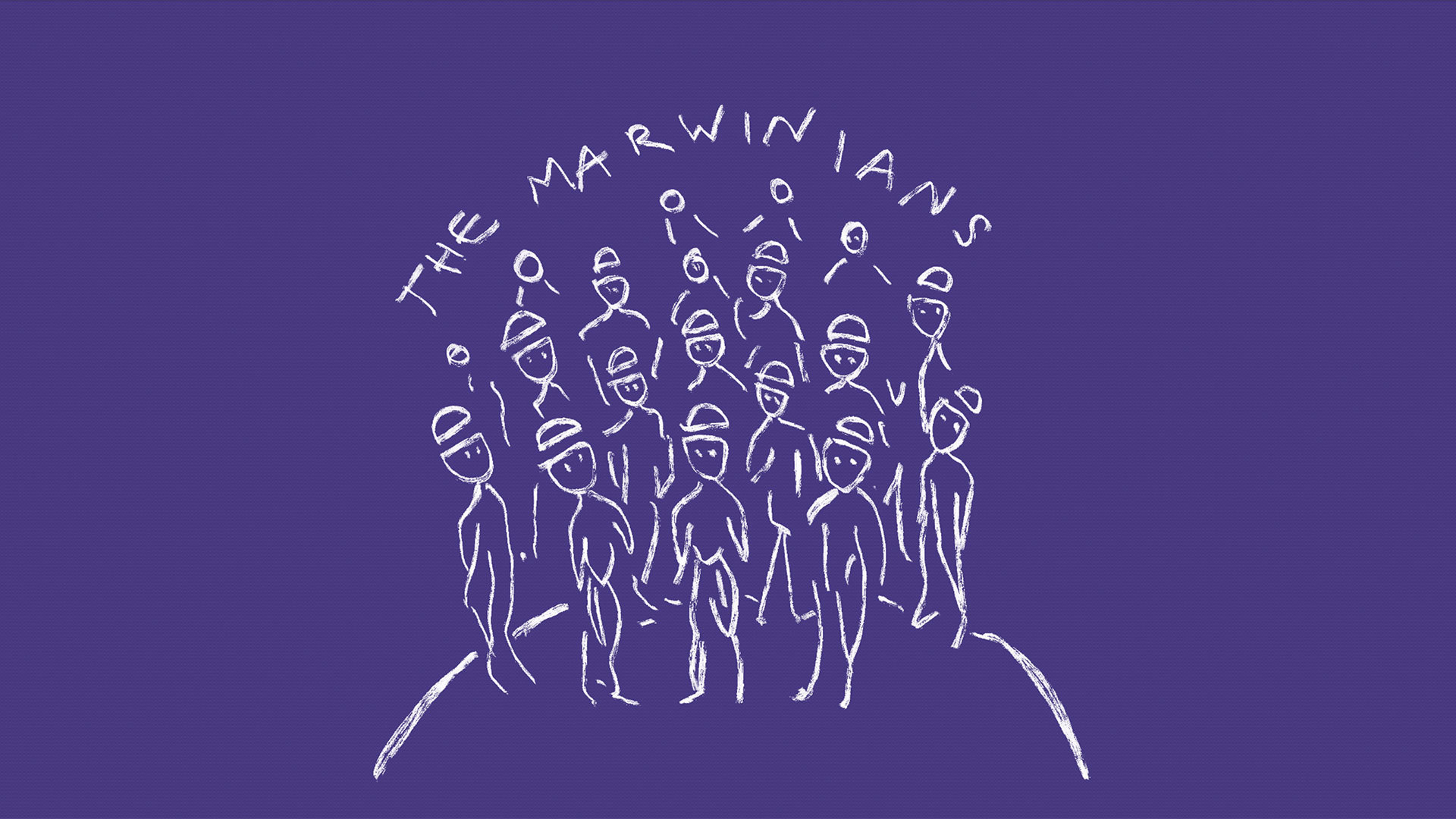